Pétanque originated in 1907 or 1910 in La Ciotat, in Provence, France. Petanque is a form of boules where the goal is to toss or roll hollow steel balls as close as possible to a small wooden ball called a jack while standing inside a circle with both feet on the ground.

The Social Rules of Pétanque

An outline of the game:

Pétanque is a bowling game distinguished by its flexibility, its short unprepared piste (playing field) and pitched boule delivery. Social rules are simple and the game is usually played with enjoyment and comradery the main priority. Teams are formed of one, two or three players and the object is to get a boule as close as possible to a small wooden jack or cochonet (pronounced cosh / o / nay). After all the boules have been thrown the team with the closest boules wins that end. Scores are by the amount of boules closer than the other team and the first team to 13 wins.

Pétanque has many attractions, one of these being the small amount of equipment needed to get started. Two or three boules is all a player uses, and once bought these are about all you need besides a cochonet and some measuring equipment. Boules are very durable and can last indefinitely. No special uniforms are needed and the game is played all year round. Because anyone can play it makes Pétanque an ideal family game. Children love the game with its simple rules and like the fact they have a chance to win against adults. No – one can avoid being beaten sometimes because it can be difficult to predict how a boule will run on different surfaces. Reading the piste is one of the challenges that gives the game its charm. People with disabilities can join in a game without disadvantage, a variation in rules allows play from wheelchairs. Special magnets are available to help pick up boules which helps if you have a disability can’t be bothered bending down or you’re just not as young as you used to be.

Boules are unbiased, usually made of metal (different compounds are used) and are round and roughly the size of a cricket ball (competiton – min 7.05cm and 8 cm max, weight 650grams min and 8oo grams max)

The rules of play are straight forward, the following social play guidelines have been simplified from the official rules: 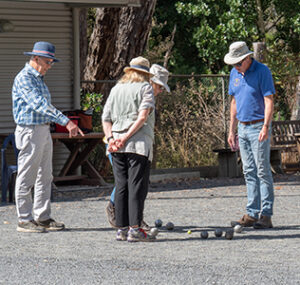 Question: If the cochonet is moved during the game what happens?  Answer: Continue to play on the cochonet in its new position. Exceptions are if the jack is lost, moves out of bounds or stops more than 20 metres from the circle. In these cases begin that end again.

Question: How do you throw the boules?  Answer: In any way you like, as long as your feet don’t leave the ground.

Question: Does it matter if the boules get scratched or dimpled?  Answer: No. Superficial marking shouldn’t affect play

If you think you have the game worked out and are curious enough to try it out please come along and join in. Our Club does it’s best to make everyone feel welcome and will help you out to the best of their abilities. If you would like more information please contact us.